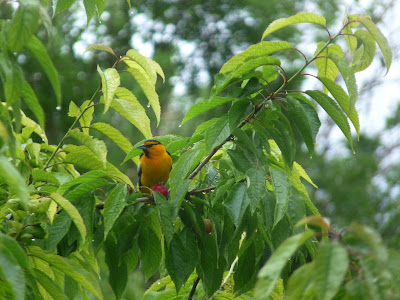 Well, I am finally back. Seems Vickie's computer crashed and she has not been able to do anything for about two weeks. thank goodness she has this back up computer given to her by Zeus's mom and dad so we can get back Online. Crazy how important this internet thing is to here. since you last heard from me,

I have been very busy making sure that Abby doesnt eat the baby birds that are just learning to fly. It was so nice to listen to them after they were born. I could sit underneath the nest and hear them asking their mom and dad for Food, Food and more food. They were pretty insistent. After about two weeks, they started hoping in the branches around the nest and it was fun to watch them.

One day I was looking up and one of them pooped. It was like watching a big white wad of gum falling to the ground. It almost hit me on the head but I moved at the last moment. Of course I had to taste the big white glob, just to be sure it wasn't edible. I am still deciding on that one.

Once they started to test their flying abilities Abby began to sit under the tree with me. I was just enjoying their company but Abby was looking for an afternoon snack. Vickie noticed Abbies interest and Abby was banned from the front yard for the rest of the week...... 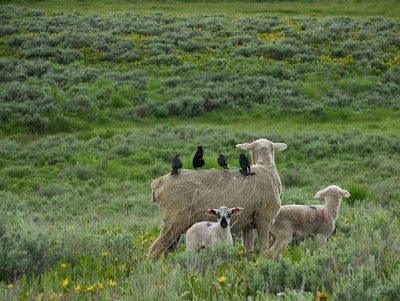 I like birds, Now I am seeing them everywhere when we go for rides. John took this picture for me the other day when he was hiking up around Ant Flats. check out the birds, pretty cool isn't it. I wish I had been there. I think the little lamb and I would have had a great time too. 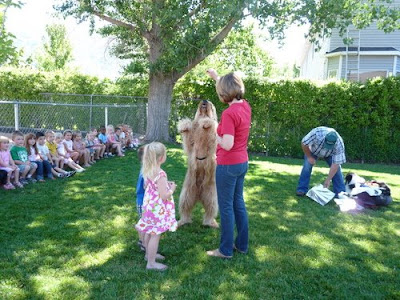 On Thursday I got to go with Murphy and Tucker to The childrens Classic where we taught them about fun ways to stay safe. I am still a little wild to be let free among all those kids so I spent most of my day there on a down stay over by a bush. I did get to be petted after the demos was over with though. The kids really like me.......I think it is my innocent sweet face. 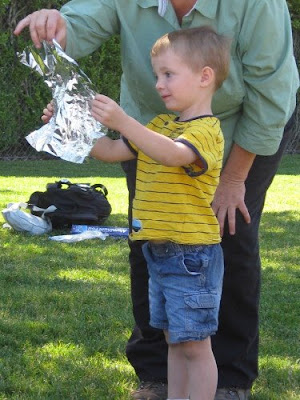 Vickie and her friends John and Diane headed up to go ATVing this week, without me. We have all been cooped up in this house through all the stormy weather for weeks and when it finally does get a little sunny, off she goes (WITHOUT ME).

She promised that she would take Jamie and Me up camping just before the fourth of july to make up for leaving me behind and I intend on holding her to it.

When she came back she said it was Most Beautiful up in the mountains right now. All the flowers were in bloom and even the moose were out. As if that would make me feel better. 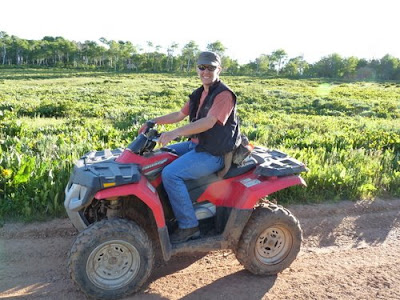 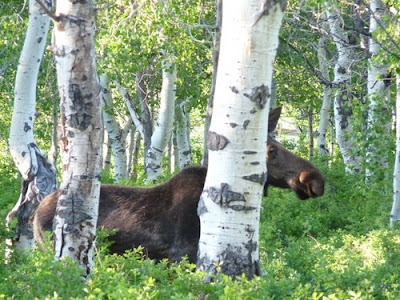 I was feeling a little upset about the fact that I had been left behin when we got some really special company. Up drove Vickies mom and vickies nephew Jared's Wife Katie and their son Garret. (Yea, try to figure that one out) Well, I had never met Garret because he has lived his full 2 years in New York. I mean I had heard about him, but never met him. I had seen pictures and read his blog (well had Vickie read his blog to me) but now I get to meet him.

He and his mom went on a little walk through the kennel meeting all the other dogs, then we all jumped into the truck and car and took off for the park. I was gonna get to show him how good I swim. I was so ready to show off for him, cause, well, cause he seemed like such a cool kid. 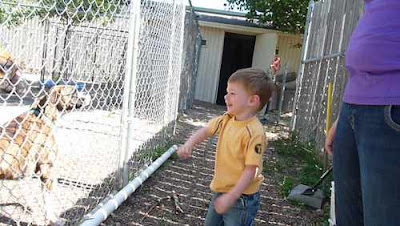 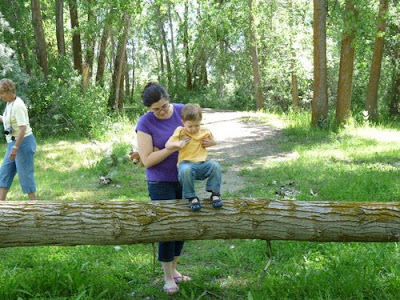 We played in the water, I played in the water, but I made sure to get everyone wet by shaking all over them. Then we walked around the lake to the south end and I swam some more. Garret would throw the stick for me and I would jump in and swim to it. He needs a little work on his throwing arm but I think, given a year or two, I am going to have a real stick, ball throwing friend.

So now I have met Corbon, Garrett, Callie and Scott. All the little ones in the family. Vickie says it is a whole new generation of fun and I think I agree with her. 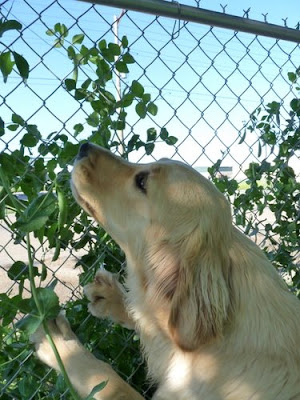 I am a little bored so I think I'll go get one of Vickies bath towels and tear it up for her. I know that makes her soooo happy. Better yet, I will head out to the garden and eat some peas. Yeh, thats a good idea. I love those sugar snap peas. Lucky for me they are easy to reach.

Have a good day everyone. It is nice to be back.

Vick- I love your blog- keep it up! Though I have to say it makes me so homesick to see everyone there having so much fun. What would you say to a little visit in August or November??